China-UK supply chain: A Chinese influence in the UK?

Chinese President Xi Jinping recently paid a visit to the UK as part of UK-China Year of Cultural Exchange, which was intended to strengthen business ties between the two countries moving forward. The visit may have seen a number of deals made and promises for further co-operation between the countries, but the question is, how is this visit likely to affect future business relationships between China and the UK?Ministers said, ahead of President Xi's four-day visit, that they expected £30 billion-worth of trade and investment deals would be struck between China and the UK. The Treasury also said that it hopes China will become the UK's second biggest trading partner within the next ten years. 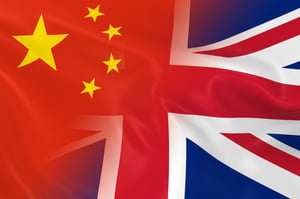 The UK will receive investments from China to help boost its infrastructure in manufacturing cars, plans and ships. these these deals are expected to create 3,900 jobs across the UK. Meanwhile, China could use its business in the UK as a way to advertise its capabilities to other possible trading partners.

The China-UK supply chain will become a well oiled machine as a result. Among the deals that have been struck are for the Chinese company CGN to take a 33.5 per cent stake in a new nuclear power plant due to be built in the UK. This is known as the Hinckley Point project and is run by French energy company EDF. Additionally, China Equity and Aston Martin have struck a £50 million deal, which will help create the emission-free, electric RapidE sports car. The UK are global leaders in design and innovation, taking something quintessentially British such as the Aston Martin and making it an international collaboration is a good first step in expanding the UK's exports. In terms of future deals, it seems there is scope for further investment within the energy and automotive industries.

What's more, certain creative sectors could also see investment from the Chinese consumer markets. There has been growing interest among the Chinese middle classes in British things like royalty, music, fashion and TV dramas. However, many are skeptical and have pointed out that the amount that China can invest in the UK has the potential to be reduced in the future, depending on how its economy performs. Over the third quarter, the Chinese economy grew by 6.9 per cent, which is the weakest rate seen since the global financial crisis but still growing faster than many other countries.

Although we will have to wait and see how both countries will benefit from these agreements, one of the most exciting aspects of these business deals is knowledge transfer. With Jaguar Land Rover, Rolls Royce and CNPC pooling their resources, innovation and knowledge exchanges are inevitable which is benefit business in both countries. KSF Global are a UK based company with Chinese roots, so this is an exciting time for us. We are passionate about strengthening business ties between the UK and China and cannot wait to see what happens as a result of these deals to benefit the people of both China and the UK.

← How can 'lean inventory' help your business? Drones in the supply chain →