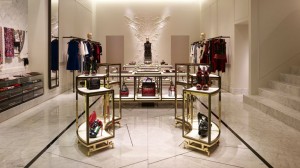 High fashion power house Alexander McQueen unveiled their new flagship store in the chic area of Aoyama, Tokyo on the 9th June. The stunning new store sits alongside other fashion greats such as Balenciaga, Marc Jacobs and Prada.

The new store crosses two floors and features clothing from the catwalk along with McQueens ready to wear collections. Creative director of Alexander McQueen, Sarah Burton, conceived and oversaw the building of the new flagship from concept to implementation. The shop is becoming a unique local feature in itself with cracked Calacatta Oro marble flooring and staircase with dramatic black lacquered railings. The soft colour scheme of purple, gold and greys give the retail space a Grecian feel that is both timeless and of course, fashionable. Alexander McQueen is famous for putting in the time to ensure that no two stores are the same and they are meticulous in creating unique detailing. Plaster panelling of wings, gargoyles and skulls features heavily throughout the store taken from McQueen’s skull printed scarfs.

Jonanthan Akeroyd, CEO of Alexander McQueen is keen to make sure that customers have a unique experience at every store; “It’s important from Sarah’s (Burton) point of view that we adapt and change [the store concept] so that it doesn’t feel like you’ve been there before. For customers that travel, it’s important to see a bit of personality there.” To drive the point of ‘uniqueness home, Takeo Hanazawa and Takao Togashi were commissioned to create artwork for the new flagship store, including the main centrepiece hanging from the ceiling in the centre of the store. The artists are said to be inspired by Japanese ink painting ‘Hyonenzu’ that ties in with the overarching motifs of skulls, fish and shells.

The new retail location perfectly complements Alexander McQueen’s smaller accessories store nearby in the Roppongi Hills district of Tokyo.  The fashion giant had only been using pop-up retail spaces until recently, showing the strong demand for the British brand in Japan. Although Japanese retail markets are not as strong as America or China, Alexander McQueen appear to be investing in long-term brand loyalty from consumers in Japan. Alexander McQueen has revealed that they have further plans to open new stores in China’s Hong Kong and Chengdu this summer, expanding on their already and growing presence.